Ionising Radiation and you

What is a millisievert?
For ionising radiation (X-rays, gamma-rays, electrons, neutrons etc.) the quantity of absorbed energy is called a "dose" and is measured in sieverts (Sv). A sievert is a very large and extremely unusual dose so more often we talk about thousandths of a sievert - a millisievert. 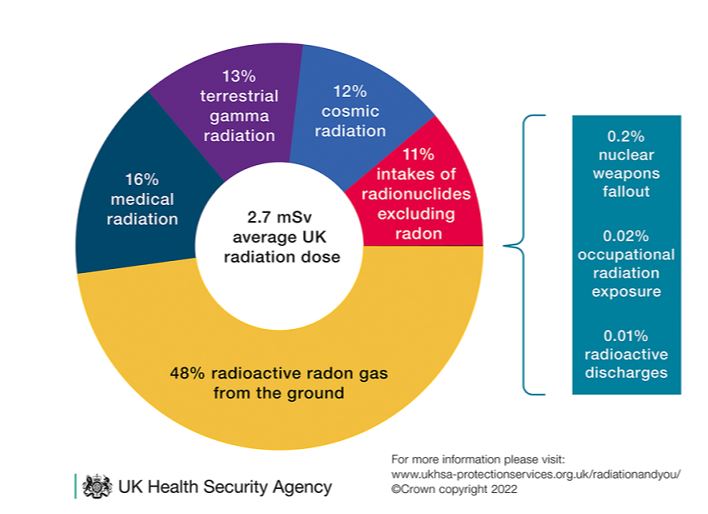 Ionising radiation can be found in soils, in our air and water, and in us. Because it occurs in our natural environment, we encounter it every day through the food we eat, the water we drink, and the air we breathe. It is also in building materials and items we commonly use. The UK Health Security Agency and its predecessor organisations have calculated the exposure of the UK population from naturally occurring and artificial sources of ionising radiation periodically since 1974.

Information taken from the report PHE-CRCE-026

Contributions to the average dose in the UK

Just about half of the average annual radiation dose to people in the UK comes from our exposure to radon. Radon is a naturally occurring radioactive gas that can be found in homes and workplaces all over the world. It is produced by the radioactive decay of natural uranium in the earth's crust. It eventually becomes the gas radon that seeps into buildings.

UKHSA has been measuring radon in UK homes for more than 30 years and offers advice to anyone whose home has been tested and needs to know what to do next.

A radiation dose from medical exposure accounts for about 16 per cent of the average annual radiation dose. Radiation has long been used in medicine to produce images as an aid to diagnosis, as in CT (computed tomography) and X-rays, to kill cells, such as cancers and to provide palliative treatment to patients by shrinking cancers, slowing down their growth and so relieving symptoms.

Radiation doses can pose a health risk so every medical exposure must be justified by the doctor in charge of the test/procedure.

UKHSA routinely surveys medical use of radiation in UK healthcare settings, assists UK and European policy makers drafting rules and regulations on how radiation is used in medical settings and assists the frontline practitioners, such as radiologists, to ensure they are using the best practice to minimise radiation doses and risks to patients and staff.

All materials within the earth contain some degree of radioactivity and some of those materials emit a form of radiation known as gamma rays. Because rocks are used as the basis of building materials it means these materials can emit gamma radiation and cause radiation exposures in people. Although we're all exposed to this to some degree, as with radon the amount of exposure varies depending on where you live. This proportion of exposure makes up 13 % of an annual average radiation dose.

Cosmic rays constantly bombard the earth from space. They are electrically charged particles, ejected from the sun and by other stars in other galaxies. When they get to earth they interact with our planet's atmosphere and magnetic field. But the more atmosphere the rays travel through the less powerful they are. So someone in a plane or at the top of Mount Everest receives a higher cosmic ray radiation dose than someone at ground level. As the cosmic rays are charged particles, so the number entering the atmosphere is affected by the earth's magnetic fields: more come in near the poles than the equator.

All other radiation exposures

Radon, gamma ray exposure, cosmic rays, food and medical exposures account for about 99.8 per cent of the average UK radiation dose. The remaining 0.2% of exposure is made up of considerably smaller contributions.

Another contributor to annual average doses is nuclear fallout. Nuclear weapons testing in the 1950s and 1960s, and subsequent major nuclear incidents including Chernobyl and Fukushima, led to quantities of radiation being sent into the global atmosphere. Because many of the by-products of nuclear weapons testing and nuclear operations are long lived some of them have remained circulating in the planet's atmosphere ever since, gradually entering the environment - leading to radiation exposure of the public. Because these exposures are so small it's very difficult to quantify the precise size of the exposure. In the UK it is estimated to be approximately 0.2% of annual exposure.

Some people are exposed to radiation as part of their job. Occupational exposures include those working in the nuclear industry, those working with radioactive sources in medicine and manufacturing and service industries, in areas of defence, in research institutions and in universities. Spread over the entire population, the annual dose is about 0.02% of the annual exposure.

Find out more about our services

Another contributor to average annual doses is from regulated discharges from industry and hospitals. Civil and military operators are permitted by the Environment Agencies to discharge some radioactively contaminated gases and fluids to the atmosphere and water courses. Any radioactivity discharged into the environment is carefully monitored and controlled , and, over time, such discharges have reduced considerably. UKHSA estimates that 0.01% of an average UK citizen's radiation dose comes from discharges. In context the same person receives about 5,000 times as much from exposure to radon each year than for permitted discharges.

Find out more about our services

Comparison of doses from sources of exposure